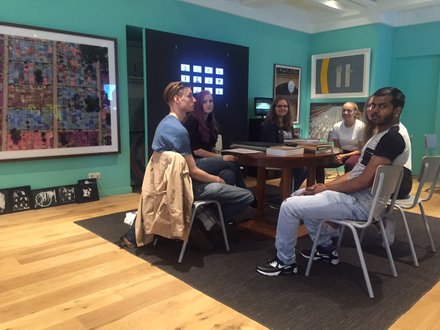 Schools have started again. Six students of graphic design at the ROC Amsterdam were on an assignment to visit a museum and had decided to find the alley which is named ‘the short one crossing the street to Leiden,’ or in Dutch: ‘Korte Leidsedwarsstraat,’ where on the fourth floor the museum is housed. At the back of the building, but with a view of an innercity canal and the theater. I showed them around and we discussed a bit working with pencils or computers and also typography. I told them of this unexpected, but true fact that of all places a company in Amsterdam realised that the electronic age ended the urgency to simplefy Arabic writing for typesetting and made it possible to incorporate all the historical riches and details of the Quran’s traditional writing in an interactive digital script, the result of which was very recently launched as the official Muscat e-Quran.

And here to the online e-book itself: