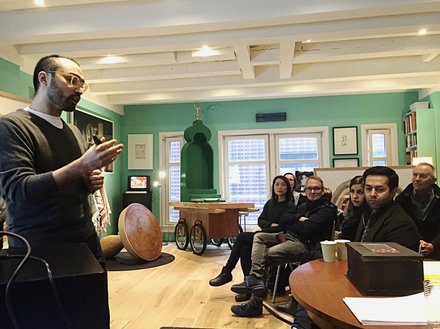 An afternoon with Abdulrahim Turkistani

On Sunday the 11th of December 2016 Abdulrahim Turkistani, an artist from Saudi Arabia, was invited to give a presentation about his art practice, after we had acquired several of his works in a series he names Atlas. The afternoon was attended by around 30 people who in two sessions, an early one and one for those who arrived later, listened to what the artist had to say about his own work and about a future for artists in Saudi Arabia. Turkistani, who is by training a communications engineer, but attends parttime classes at the Royal Academy of Fine Art in The Hague, can be seen here explaining an electronic installation (the black box with lights on the table), the central idea of which he also executed as a performance with the assistance of nine other students. This performance, called Mihrab, can be seen on the artist's website. 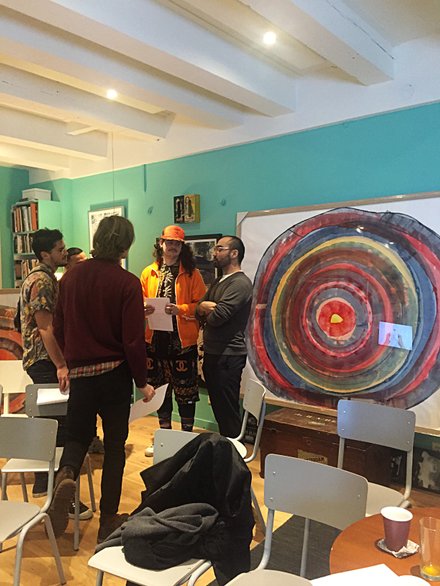 The 'art of healing' is how one of the students described me what he is being taught at university, not the art of 'making medicine'. Turkistani here is seen talking with some Dutch students with next to them the largest work in the artist's series Atlas. The title refers both to the artist's global experience as to a local tradition of textile making in the region of Kashgar in Western China from where his grandfather went on pilgrimage to Mecca and stayed there because of the unrest and changes in China in 1949.

A performance about 'personal space'

Turkistani found that people in Arabia have a more open personal space around their body than most Europeans, while at the same time with internet technology people are both expanding their personal space and accepting less privacy. Working from these observations in a performance at the Royal Academy in The Hague Turkistani positioned himself in the middle of a hall on a small pedestal and invited other students to come and join him there and ask him questions. The performance is often funny, well edited and can be seen here on his website: Salam-Alaikom. 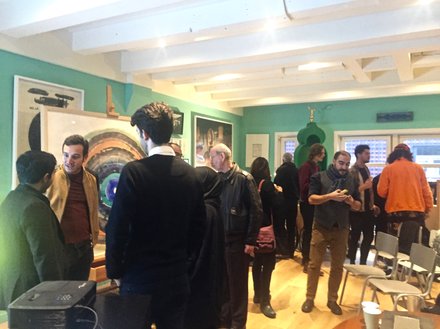 'A perfect recipe for great art'

One slide that the artist presented showed his confidence in Saudi Arabia's future as a creative nation and even as a country having the 'perfect recipe' to produce great art; because of this combination of islam, the cultural melting pot that is pilgrim flooded Hejaz and western influence as a result of the country's oil position. Not everybody agreed. Dutch scholar on Saudi Arabia, dr. Paul Aarts, questioned whether artists are really able to move boundaries in the country. While a Saudi guest on the other hand objected to the idea, mentioned by someone 'as a way of speaking,' that artists in Saudi Arabia may end up in prison if they do. 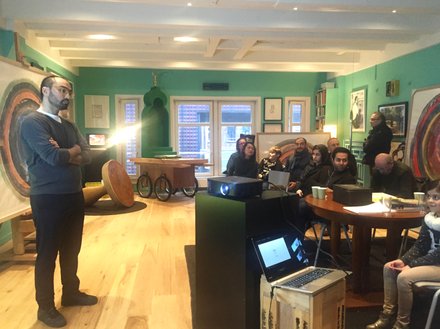 Arab biscuits and some drinks

Finally the artist was thanked for his presentation and the museum served soft drinks and biscuits from an Arab bakery on Kinkerstraat using Musaed Al Hulis' Ideologies for sale as a temporary trolley. 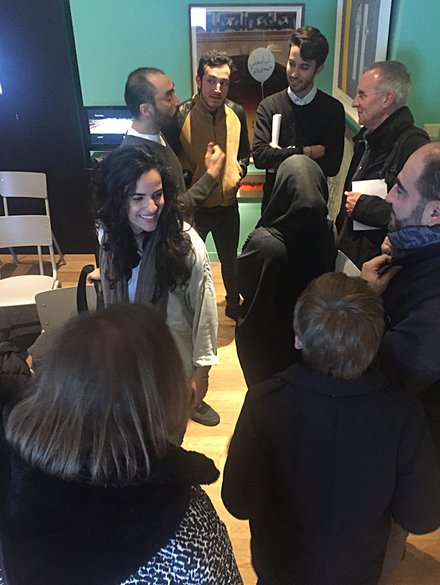