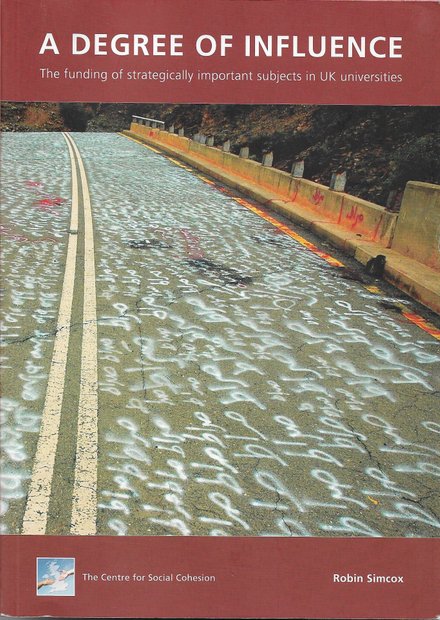 A Degree of Influence

By Robin Simcox for The Centre for Social Cohesion,

A study about foreign funding of strategically important subjects in British universities by a ‘centre for social cohesion’ which no longer exists and most of the staff of which are said to have joined a neo-conservative ‘think tank’ group named for an outspoken or hawkish American liberal of the past (1). It is of interest to us because on its cover the study printed an image of Abdulnasser Gharem's artwork Al Siraat that was refused at the Edge of Arabia exhibition in London in 2008 and one copy of which (number 3 of 6) was acquired by Greenbox Museum in that same year and exhibited in the museum and on our blog, without interference of third parties, solicited press coverage or negative reactions (2).

On pages 85-86 of his study, in a section about 'censorship'  at The School of Oriental and African Studies, Simcox gives his version of events surrounding the decision taken by Edge of Arabia's curatorial team not to show Al-Siraat. My own version of these events will be available some time soon in the Museum Report section.

(1) Henry Jackson Society on Wikipedia with many and accessible sources. Retrieved 23 August 2017.

(2) I did ask a foreign affairs journalist with some knowledge of Saudi Arabia at NRC Handelsblad to come and have a look and perhaps write a well researched story, taking into account security concerns for the artist, if any, but she at the time did not think art something to discuss outside the arts and lifestyle pages of her newspaper. Mrs. Roelants changed her opinion in 2013 and interviewed Abdulnasser Gharem in Riyadh, the result of which (in Dutch) can be found here: Niemand gaf iets om mijn talent (No one took notice of my talent).