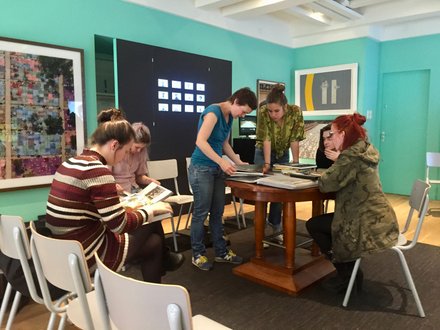 Six students on a summer course of Arabic literature at University College Utrecht visited on June 8, 2017. With their lecturer Judith Naeff who wanted to introduce her class to visual culture as well and had taken trouble to prepare them. Informed as they were about Ahmed Mater they seemed to know what to expect when they found his Desert of Pharan, Unofficial Histories behind the Mass Expansion of Mecca on the museum’s reading table. Later I was surprised by them with another book. In the museum's mailbox I found a note that evening to thank me for the visit with a book of translated poetry by Ghayat Almadhoun from Syria, which I will gladly add to the museum’s library after reading it.