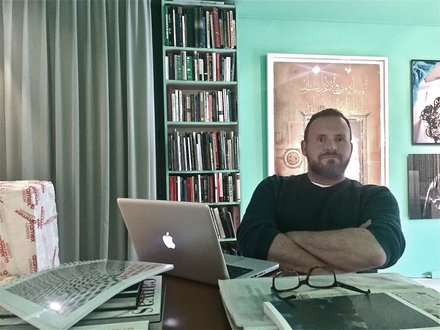 A visit from Heidelberg

From the very first year the museum has experienced an interest from the academic community in the Netherlands and elsewhere. Groups of students from the University of Amsterdam, the Vrije Universiteit Amsterdam, the University of Utrecht and Leiden University have visited both with lecturers in class and outside of class in the context of subjects like Arts, Middle Eastern studies, Arabic and Islam. Drs. Richard Bionda, an art history lecturer at the Vrije Universiteit, has visited the museum with a new class every year since 2011. From King's College London the museum received a Chinese student to do research for an MA in cultural and creative industries. University lecturer and Islamic art curator Luit Mols wrote an article about the museum in Dutch Middle Eastern and Islam studies magazine Zemzem in 2012. A student from University College Utrecht, Charlotte Wittesaele, who visited with her class a few years ago, has this year written a bachelor thesis about the museum, titled (see the image below): The Greenbox Museum: Institutional Autonomy in the Representation of Global Art. Regular visits to the museum with private masterclasses were also made by art historian Jeanette ten Kate of Sinopia Art Consultancy. From the University of Groningen the cultural committee of Saudi Arabian medical students in that city paid the museum a visit in 2013 and in 2012 the founder of the museum gave an update on his own research at Leiden University after Aramco Overseas company's publicity department withdrew from a symposium about art from Saudi Arabia it had initiated itself at Leiden University. This week then the museum received a visitor from the Ruprecht-Karls-University in Heidelberg, Germany's oldest such institution. Danijel Cubelic is a research fellow for contemporary Islamic cultures at their Institut für Religionswissenschaft and has, while looking into the cultural developments in the United Arab Emirates and Qatar, picked up an interest in contemporary art from Saudi Arabia. He requested and was most welcome to spend a few days in Amsterdam to go through the museum's modest library and collection and talk with its founder, who made this picture of him at our reading table yesterday afternoon.