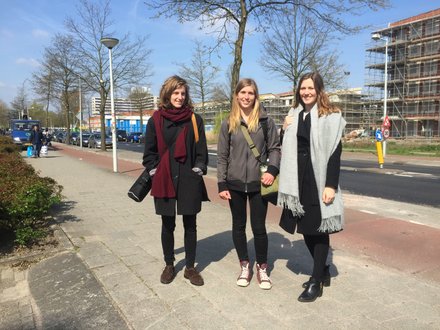 Visual anthropology was on their program at the University of Amsterdam. Ethnographic research with a video camera is what that is. So the three ladies in the picture brought a camera and followed me around and talked to me in the museum on days that it was quiet in April and May this year. One of them had visited the museum before and came up with the idea. They produced a film and a paper about the museum and it was screened together with five other films, about other people and made by teams of fellow classmates, at a university moviehouse on Amsterdam's Roeters-island. Since they were students with no track record yet, and I had not had a haircut that month, I did not give them automatic permission to show their short documentary online. Just to remind myself and them perhaps, how censorship works. They, Marleen Bakker, Doortje Hörst and Sara Kerklaan were however good, careful, serious and ambitious company in the museum and were cheerfully guided by their teacher Sanderien Verstappen. Facilities and guidance for the students was also provided by DIA, the Academic Documentary Institute of Amsterdam.