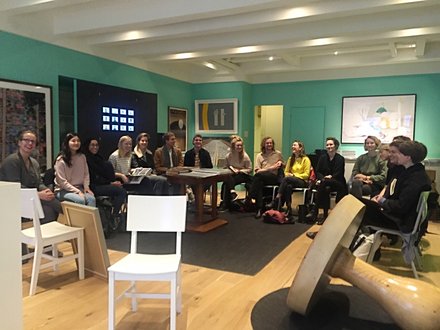 On March 14 professor Christa-Maria Lerm-Hayes, professor and chair of Modern and Contemporary Art at the University of Amsterdam, teaching a module centred on curating memory visited the museum with her students. She had suggested her students to read Finbarr Barry Flood’s essay ‘From Prophet to Postmodernism? New World Orders and the End of Islamic Art,’ which taught me one or two things too. Mr. Flood selects as a starting point for this western concept of ‘Islamic Art’ the building of the prophet’s mosque in Medina. Having been educated, however, by artist Rashed Al-Shashai’s artwork Shortcut (2015), shown to me at Qaswra Hafez's gallery in Jeddah, which deals with the prophet himself drawing a line in the sand to illustrate a straight path, I would consider  that action as more indicative of both a history or art made under the inherited influence of Mohammed and the legitimacy of actually making art in an ‘Islamic’ world. Spending much time introducing the students the works from Saudi Arabia in the museum’s collection, we didn't get to discuss much the essay. However an interesting point, raised by one of the students was an observation about  Japan: that the Japanese tend to collect art from the United States and Europe, while on those continents collectors have more of an interest for art with a clear Japanese identity. Would that be true of Saudi Arabia and this museum too? I can not answer that question scientifically and quantified. Probably yes, but only three things are really clear to me. One, that there are a number of Saudi collectors who believe in supporting their own artists and help them to connect with the world. And not only out of business acumen. Two, that this museum is indeed specifically interested in Saudi Arabia, so it is by that choice already implied that it will choose art with a Saudi angle, but increasingly also, and that is three, this choice enables me to distinguish between what is a genuine vision from a Saudi Arabian perspective and what is just a hat-trick in which the hat was swapped for a shemagh. Other students had questions too. An American student wanted to know if and how the museum noticed increased tensions in the ‘islamic world’ and another wished me to put in a greater effort to make the museum known among a wider audience to counter stereotypes about ‘the islamic world’ in the mass media. I find however in Amsterdam that competing with public and lottery funds directed towards marketing cultural events will drain too much of my finances, with which I prefer to buy art.