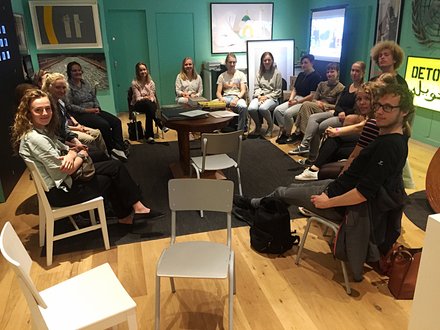 A week before professors and staff officially opened the University of Amsterdam for a new year of learning these first year students of religious sciences arrived with their study-and-socialize group Ars Notoria (The Art of Magic). Belief is perhaps not a seasonal thing, having to wait for an official bell, although studying it in context, which is what these students intend to do, might allow for a few weeks of holiday. Art however, might never stop or take time off. 'But why, why would you close the Stedelijk Museum in times of war?' is what one of my guests asked, when after spending much time introducing them to the museum and many of the ideas Saudi Arabians come up with in their art, I shared a moment of doubt about sitting here in this pleasant routine of research and discussion while Saudi Arabia is so deeply invoved in a war in Yemen, imagining myself that Holland would probably close the Stedelijk Museum during a difficult military campaign against Belgium. But why? Perhaps because you need the curators and staff to fabricate bandages or aim the guns, lending a hand, while preventing the museum to be used for propaganda or distraction of peoples minds away from what is going on. These things just crossed my mind and our discussion. I have no answer here - well, for sure, distract, confront - but rather did think of the art that comes with war, like the English poems written, even revealed perhaps, in the trenches of Flandres or quite the opposite: Las Lanzas by Velasques, a painting celebrating a Dutch surrender of  the city of Breda to the Spanish. Stupid me however forgot to point out to them Abdelkareem Qasem’s 2014 Wills of War, which question or just demonstrate the severity of a soldier’s decision to sign up for death. About the collection one student commented that in between so many rational works, she enjoyed the expression of emotion, even though it looked sad, in a work by Sara Abdu: I wish I could go back, for me reminiscent of Damien Hirst’s Mother and Child divided. ‘It's indeed a sad work,’ is what the artist told me when she surprisingly turned up in the museum for a visit, only a day after these students were here, travelling here from Jeddah via Paris where she is working in an art residency program. It looked to me that it was a bit of a self-portrait and she did not fully deny that.