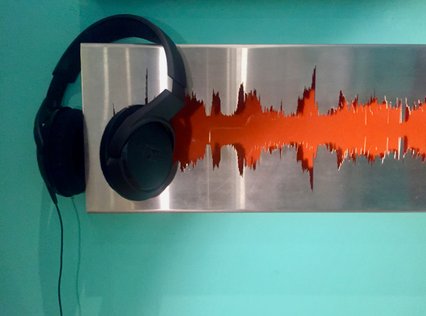 A piece of metal in which the sound of several voices has been graphed against an orange background. It follows a pattern captured with an electronic audio device and was made by the artist as an afterthought to his earlier work The Question. For that work, a video installation of microcasting screens, the artist asked 28 people from Riyadh to share and record with him their innermost thoughts about ‘Allah’ and broadcasted parts of these interviews projecting the interviewees faces in concentrated slow motion, but without opening any part of the audio recordings to preserve the sanctity and privacy of the talks. For a little comfort: The Question is supposed to be watched while listening to composer Philip Glass’ motion picture music 'I’m Going To Make A Cake.'

The title of the new work here, The Black Box, together with the colour orange refer to the cockpit voice and flight recorder stored in a similar named container aboard airplanes. Never to be used, except and only after an emergency. However, the artwork has with it an iPod and headphones enabling us to listen to the sound that was graphed. Apparently Al-Othman thought that the box might be opened a little and needed to be listened to after all. Why? Has there in the matter of Allah been some accident, crash or emergency that needs to be studied by specialists? To find out how things that went into the box came to look as they do when they came out again?

I collected the work for the museum in 2014 from Alaan Gallery in Riyadh and the gallery's philosophy trained curator at the time wrote: ‘we hear a part of the recording, but we cannot fully understand. Thus, the privacy of the conversation and the trust between the artist and interviewees is secure, allowing the mystery of what was privately shared to remain intact.”

Clearly that is true. The voices that we hear listening to the iPod have no names to them and cannot be tied to the faces of The Question. And indeed, whatever we may understand is not an opinion or essay in full, but nevertheless with the help of a Saudi Arabian intern at the museum in the fall of 2016 we did try to make a transcription and translation of those parts that could be understood. Make of it what you want - the text is below - but know that visitors to the museum often like the work and only recently a young Syrian refugee put on the headset to listen with concentration, then turned his face to the museum’s curator with a smile and a gesture of thumbs up. Naturally, he meant to compliment Al Othman, the artist.

Below is a translated transcription made by Greenbox Museum intern Hawazin Al-Otaibi in September 2016 listening several times to the artwork’s iPod with the headset. The voices are identified with a letter and where words could not be recognised we left three dots. Between square brackets some observations.

A. Dont’t think that people like to talk about that: love and romance. [Background: like a hospital heartbeat]

B. I [speaker has an Egyptian accent]

F. [Syrian probably] There was a year we went there and it was dark.

I. Possibly it was.

J. [Sounds like ‘easy going’] No because this question was answered. [Music] I love surprises. I love components of evil and good. I believe opportunities and believe in luck and everything. Opportunities, luck and coïncidence everywhere.

The artist's website's page about: The Black Box

All reproduction rights for the artwork belong to the artist.

This page or parts of it may only be reproduced with permission of Stichting Greenbox Museum Foundation.