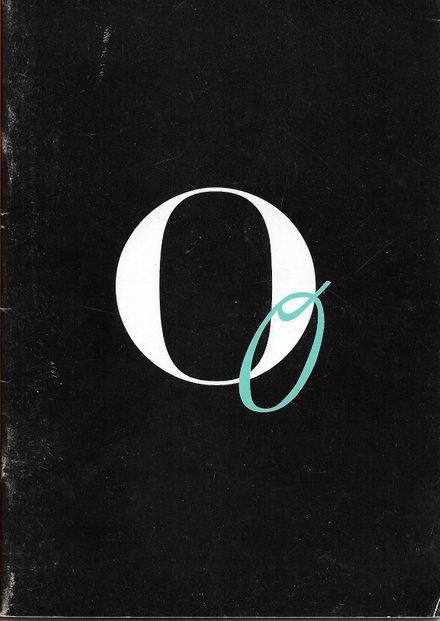 A 'first annual' "O" exhibition organized by Oasis Magazine in 2010 at the Riyad venture L'Art Pur Foundation Gallery, which houses on the ground floor of The Arts and Skills Institute. Appropriately on glossy paper, for a magazine like Oasis, the A5 size catalogue made sure that the sponsoring companies and functionaries, like PepsiCo's marketing director Farhan Hasan and U.S. ambassador James B. Smith, had their say in the beginning and did not  interfere too much with the other pages of the catalogue introducing 28 artists from Saudi Arabia with one or more images of their work and a short biographical paragraph. The magazine describes the artists as 'a modern, progressive and young generation,' with a 'rich cultural heritage.' The ambassador refers to that heritage by naming both calligraphy and a name from Aleppo, that of the Syrian-American classical artist and draughtsman Wabi Al-Hariri. Some of the artists in the catalogue also work with pen or brush in their hands, but many are actually photographers or use digital technology. Here a list of  the names and the titles of their work in the catalogue.

Eastern Girl. A digital work of a girl holding a mabkhara.

Black-White and Urban Decay. Acrylic on canvas and photography. Discusses opposites and greyzones.

"Wonderism." Oil on canvas. A colorful portrait of Stevie Wonder.

The Path and Ink Composition. Digital on canvas. The artists sketches and 'paints abstract expressionism' but finalizes his work with computer program Corel Painter, which simulates 'the appearance and behavior of traditional media.'

The Man in the Portrait. Acrylias and ink on canvas. Known now for her Mickey Mouses, this painting seems to prefigure the anonymous and universal portrait of men in certain life situations.

Girls with lipstift. Acrylic on canvas. As ' a tribute to all women who find the tim eto put on lipstick and have some fun.'

Frame of Letters and Lyrics Lady. Digital. Calligraphy combined with an image of filmstar Audrey Hepburn. Deviating from all other pages of the catalogue the text for this artist is not in English, but in Arabic.

No titles given. Mixed media. Faces with hats and hairstyles. The artist is described as an 'Art-ographer' and the text includes a full artist statement which begins with: 'I like to compare my art to an unplanned cruise in a car around busy streets in a foreign country.'

3ood and What's On Your Mind. Digital. The artist is embarked on a project that 'goes around taking into consideration other people's perspectives and directions of thinking (...) to see the world in its bigger image and take better judgements towards life'

No titles. Photography. Is sharing with us 'the beauty' of Bahrain.

Secret Window. Photography. Concentrating on a detail of a puzzling village window in Turkey.

Kingdom, Euphoria and Solitude. Photography. Night photos with symbolic meaning attached to them with their titles.

Three. Photography. With an interest in sketching too, the artist captured an unpolished moment of sea, sky and man balancing together.

Rain. Photography. A diptych showing both the beauty of rain and man running away from it.

Untitled. Photography. A detail of nature.

Reflection. Photography. Clever image of a landscape reflecting in a large number of raindrops both large and small.

No titles. Slow shutter photography. A clear vision and ambition is expressed.

Untitled. Photography. An image of most probably old Jeddah.

No titles mentioned. Acrylic on canvas. Paintings with a quality reminiscent of literary book illustrations.

Without title or image. Animation. The artist describes her method: 'for my Chibi Style video, I used Adbode Photoshop CS4 to draw a picture. Then I used ishowU HD to record my screen while I was drawing. Imovie '09 was what I used to edit the whole video.' 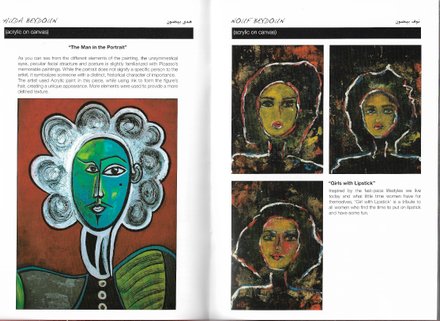